As a self diagnosed gear-geek I’ve come to realize that there are certain types of gear that I get more excited about than others. A rope? sure I’m psyched if it helps give soft catches, if it repels water well, and if the colors are sexy, but I’m not going to “ooh” and “ahh” at certain features, or in some cases its lack of features. I’ve realized that when it comes to gear, the backpack, one of the oldest pieces of outdoor equipment, can be the most exciting piece to me. Nowadays there’s a backpack for skiing, one for multi pitch rock, one for cragging, one for alpine climbing, and of course the all-arounder. This means there’s a plethora of features for each discipline, and an infinite number of combinations of features for a multi- use pack. How exciting!

An alpine pack at home on a desert big wall?

James nearing the roof on pitch 2 of Levitation 29

As a New Hampshire native and home state fanatic I was climbing with packs made in New Hampshire. Two companies here make bare bones, durable packs that last forever and have a cult following. Neither of them use frames. To some this is a weight savings, and they feel that the pack climbs better than if it did have a rigid frame. I was in that camp until our friends at Mammut gave the Mooney Mountain guides the Trion Guide packs. I quickly remembered the other side of the frame vs. no frame pack argument and realized that, for me, the trade off in weight savings is not worth going frameless, and the new frame systems climb wonderfully and are easily removable, if so desired. After this reintroduction, I turned to Mammut’s alpine pack line to find a light weight alpine pack. Below is a run down of what I chose, the Trion Light 28L.

At home in the Alpine

What appealed to me initially about the pack is how modular its various features are. It can go from full framed, padded hip belt approach pack (@990g), to light weight compact climbing pack (@690g) in a matter of seconds. This is crucial for alpine style climbs where you often have a hefty approach carrying a good amount of climbing equipment. Once on the climb, most of that equipment is on your harness and being used, while you then want a compact pack to carry for the climb. Just reading the description for the Trion Light made me realize that it was going to function well, but using it in real life  and seeing how easy the transitions are has still impressed me. There are essentially 3 components of a pack that need to be modular in order for the pack to be equally as well suited for long approaches to long climbs; hip belt, the lid and closure system, and for some people, the frame.

The Trion Light Stripped down for climbing

Hip Belt: Its common place now to see removable hip belts on climbing packs. What sets them apart is how easy they are to remove and replace, and if their ability to help bare the weight of the pack is compromised by their removability. The Trion lights hip belt slides through a slot formed by the back of the pack and the lower back padding. It Velcro’s into place there. The straps, which are permanently attached to the pack, then get passed through loops on the end of the hip belt padding and velcro into place there. The whole process takes less than a minute and is easy to do with gloves on. The hip belt in this design isn’t directly attached to the frame, meaning the load transfer isn’t ideal. That being said, since its only a 28L pack, I’ve never been able to load it down enough that this was an issue. A good trade off in my eyes. 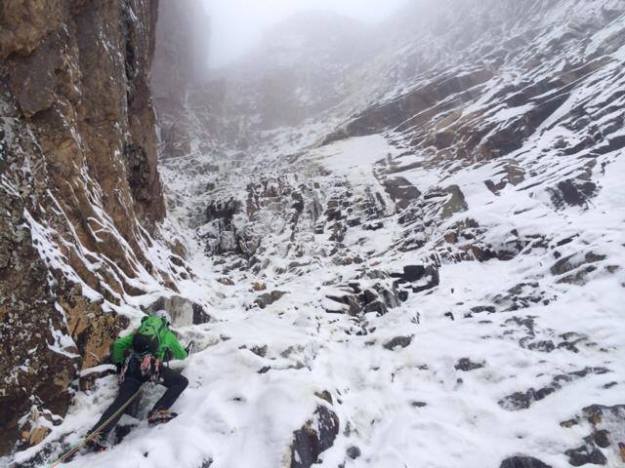 Lid and Closure System: This is my favorite part of the pack, and what initially drew me to it. The main body of the pack has a roll top closure. This makes the pack more water resistant when the lid is removed. I also find I like how roll top packs function better than those with a drawstring closures when the lid is removed. Depending on the days objective I frequently leave the lid at home, fitting everything into the pack body and closing it up tight with the roll top. The pack still functions normally as there is a buckle on the main pack body to connect the front strap too even with the lid removed. That buckle system, plus a removable rope strap, allow you to easily carry items over the pack even without the lid. The lid itself has the standard mesh under pocket, and a large upper pocket. I found I have to be particular about what I put in the upper pocket because its so large you can really add a lot of weight to the top of your pack, which is not where you want it. So instead of keeping heavy food, GPS and other heavy items up there, I pack my goggles, mittens extra hat and other light weight items I might want quick and easy access to.

Kelley O., an MMG guest using her own Trion Light on an ascent of Mt Washington.

The Frame: This part really surprised me as they do not mention how easily removable the frame is in the packs description. While I tend to just leave it in there,  all one has to do is un velcro the compartment and pull the frame out.

The beauty in this packs design is not only how easy it is to remove the modular items, but how well the pack functions in either the stripped down or fully loaded configurations. There are a few other notable features of this pack. The main body is made out of a light weight triple ripstop nylon. This keeps the pack weight low and the overall durability reasonable. While I’ve put a few holes in it over the past two years of heavy use, the triple ripstop has kept those holes from growing to tares that would render the pack useless. The bottom of the pack is wisely made with 420 denier nylon, the standard fabric for pack making. The key use of sturdier material in bottom again adds to its durability. It also has reinforced ski straps, which seem to be standard on Mammut alpine packs and are great for carrying skis in an A-frame.While I don’t generally use a hydration bladder, this pack has all the features you need to use one, if thats your system.

How I attache my hammerless Nomics. The other strap has been partially tucked into its “garage” to illustrate how they can be tucked away when not in use.

The Ice tool attachment system on this pack is the old school loop on the bottom with a velcro loop up top for the handles. We’ve all come to love the new pick sleeves and buckle system for carrying ice tools, but I think the chosen system is appropriate for this packs intended use. Some extra care is needed when attaching tools with out hammers (think Nomics) but once you figure out your system its no problem. Needless to say this set up saves a bit of weight and contributes to the packs all around streamlined, no frills appearance. Further to that end, the loops tuck into built in pockets when not in use, such as all of rock season, and really make the pack streamlined! 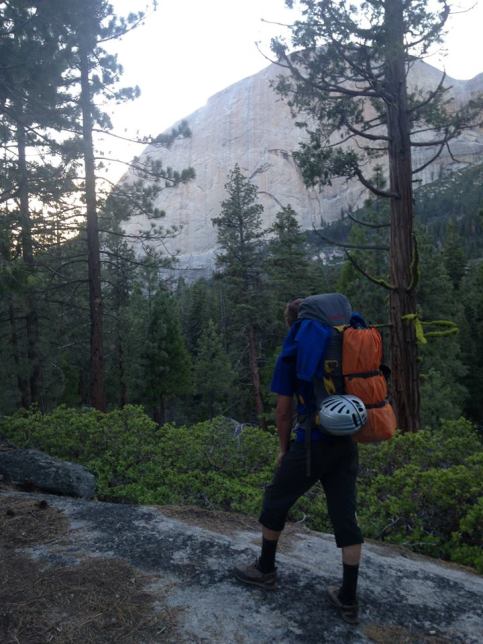 Finally, the attention to detail really shines through in the packs compression system, and well thought out use of buckles. Seriously, this one caught me by surprise. I’ve already mentioned that the main closure strap can work with the lid removed, which is some what exceptional to this pack. The side compression straps also have alternating buckles, on one side the female end is on the straps, on the other side its the male end. This allows you to clip them in the opposite direction, strapping something larger to the very back of your pack. Similarly, the roll top buckles match up to the buckles that hold the lid on. With the lid on the pack you roll the top closed and clip the two ends of the pack top together. When the lid is removed, you have the option of rolling the lid closed and clipping either end down to the side. 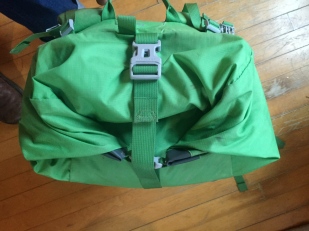 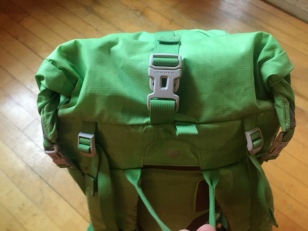 The left picture shows the roll top closure as if you had the lid on, and the right shows the option of clipping it down to the side when the lid is off. Both illustrate the extra female buckle on the back to use with the main lid strap when the lid is removed.

What I love most about this pack is its broad functionality with minimal bells and whistles. Instead of adding straps left and right, the designers paired it down to the bare essentials and made the necessary straps as versatile as possible. It seems to me that the Trion light is essentially two separate packs, one for the approach and one for the climb, seamlessly married together with no extra fluff.

At Home in the Desert

In the market for a new pack? check out Mammut’s alpine pack line here. While I’ve only used a handful, they have all show the same durability and attention to detail that has so impressed me with the Trion Light, and at a very enticing price point. Can’t find Mammut packs in a store near you? While it’s always a good idea to try packs on first, if you’re looking online, Mammut now has an online store http://mammut.shptron.com